An Engineer's Guide to Laser Cutting

The term LASER originated as an acronym which stands for Light Amplification by Stimulated Emission of Radiation. Because of the spatial coherence of laser light, the light spot can be intensely focused onto an object, causing an extreme elevation in the temperature of the illuminated area. This causes the material under the illuminated area to melt rapidly or be vaporized and consequently a cut or fissure will form in the material. This is the basis of laser cutting used in industry today (“What Is Laser Cutting? - A Definitive Guide to the Process”).

A wide variety of materials can be formed or processed through laser cutting but the most common materials that are cut with lasers today are metals such as medium range carbon steels among a host of others. Other materials like wood, plastics and ceramics are also able to be cut with lasers and the laser technology used to cut these materials is quite different from that used to cut metals. More about that later.

The various technologies for laser cutting have evolved considerably within the previous twenty years or so and now the engineer has an extremely wide choice of laser, machining principles and computerized control to precisely cut a material to an impressive level of accuracy that was not possible only a few years ago.

Due to the low set-up costs, rapid turnaround, low and medium volume production flexibility, laser cut parts are widely used in a number of fields and applications, including: 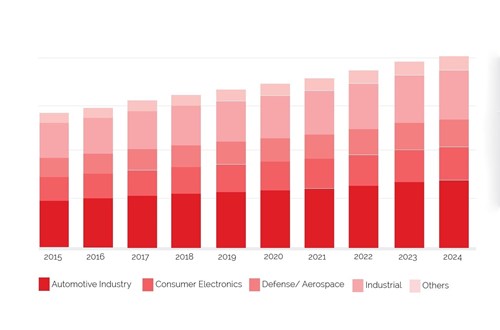 Taking the automotive industry as an example, lasers can be used to cut interconnecting parts on most of the chassis, hydroformed part secondary processing and even air bags (“Laser Cutting in the Automotive Industry”) 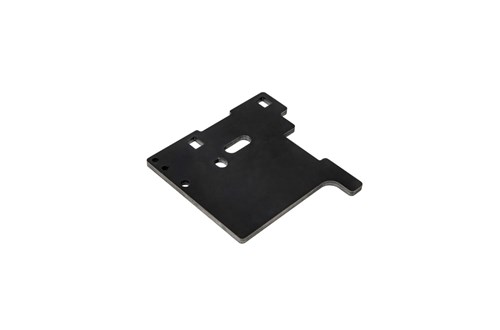 Within these three processes of laser cutting there are a number of different types of lasers that can be used such as fiber, or solid-state lasers, and gas lasers such as the CO2 emission gas laser.

The carbon dioxide gas emission laser is one of the highest power continuous wave lasers available for cutting today. It also has been in service for the longest time, and as a mature technology, it is a good place to begin describing gas emission lasers. 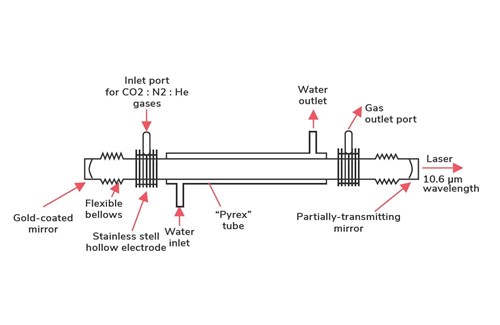 From the above diagram it can be seen quite clearly how the functional parts of a CO2 laser fit together. Mirrors are needed to reflect the light into a monochromatic stream of light photons of high intensity that exit the laser at the wavelength shown. Water is used to cool the gas tube during stimulated emission and various gases such as CO2, N2 and helium can be used during the process. 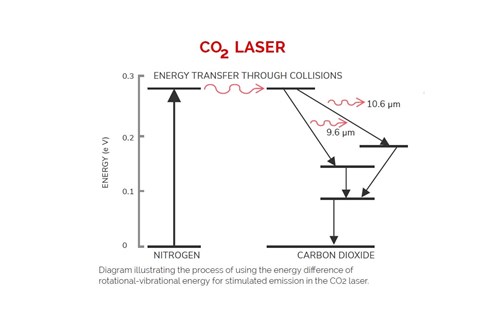 Fig. 5: Diagram illustrating the process of using the energy difference of rotational-vibrational energy for stimulated emission in the CO2 laser

At this higher vibrational level of energy, spontaneous emission occurs and the CO2 atoms reduce in vibrational-rotational energy and give off some of their energy to increase the energy and intensity of the incident light.

Gas (e.g. CO2) laser cutting is most often conducted with an assist gas which may be either an active gas like oxygen or an inert gas like nitrogen/argon.

Oxygen is the standard active assist gas for the laser cutting of mild and high carbon steels. When cutting with oxygen, the material being laser cut is burned under the accelerated action induced by the chemical reactivity of oxygen at the elevated temperatures induced by the CO2 laser. The burned material is sometimes vaporized if the induced temperature in the vicinity of the laser cut is high enough. The liquid iron oxide of low viscosity is removed from the kerf by the shear force of the oxygen jet directed into the kerf.

The pressure of the oxygen jet determines the rate of removal of the melt shear from the kerf and the value of the maximum oxygen pressure will be determined by the material thickness to be cut. Oxygen purity is important for quality cutting.

Cutting with non-reactive gases such as nitrogen is often referred to as clean cutting or high-pressure cutting. In this case, the material is melted solely by the laser power and blown out of the cut kerf by the kinetic energy of the gas jet.

With nitrogen assisted laser cutting, the melt-shear removal process is the only active process as inert gases do not react with the molten metal and no additional heat is generated. Therefore, much higher laser power and gas pressures are required. This is because the molten steel has quite a high viscosity compared with the liquid iron oxide generated during cutting with oxygen.

Laser cutting with nitrogen would be a typical choice for cutting some stainless steels (to avoid part oxidation), as well as aluminum and some of its alloys.

With recent advances in technology and capabilities, fiber lasers are rapidly becoming the laser of choice for industrial cutting applications. A fiber laser is a type of solid-state laser where the monochromatic and pumped, intensified light is directed and wave-guided down an optical fiber towards the cutting surface and is not passed through any gas for stimulated emission (i.e. a “solid gain medium”). 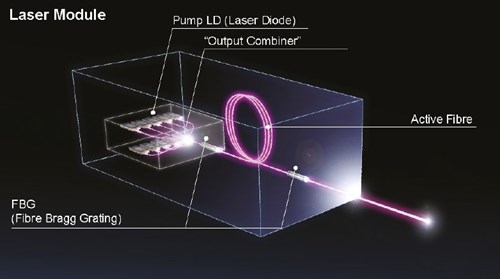 Fig. 6: The active components of a fiber laser and beam propagation

In the diagrammatic view below, Figure 7 shows the basic configuration of the optical circuit of a high-power fiber laser. The optical circuit consists of three major sections: Pump section, Oscillator section, and Beam delivery section. In the Pump section, laser light from pumping laser diodes (LDs) passes through optical fibers into a pump combiner. The pump combiner couples the pump light from the multiple LDs into a single-mode optical fiber.

In the Oscillator section, the pump light from the pump combiner propagates through a double-clad fiber (active fiber), as depicted in Fig. 6. The pump light excites the Yb ions and is amplified by the FBGs (Fiber Bragg Gratings). The FBGs act as mirrors with high and low reflectivity. The laser light is emitted from the low-reflectivity FBG. The Beam delivery section is composed of an optical fiber which passes the laser light from the Oscillator section to a processing head or a beam coupler. 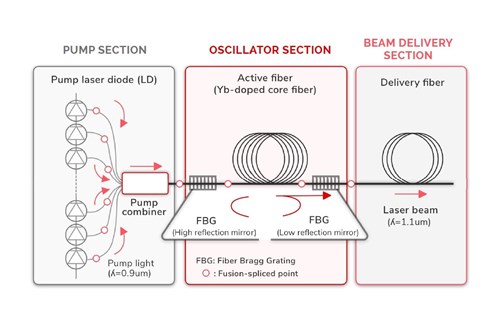 Generally, when laser cutting metals with fiber lasers, the upper limit on thickness of the metal sheet to be cut is around 20 – 25 mm for mild steels. Above this thickness, higher power CO2 lasers are used but with specialized fiber lasers for a higher price, it is possible to cut thicker plates than this. Fiber lasers are now the tool of choice for cutting metal below 15mm thickness. 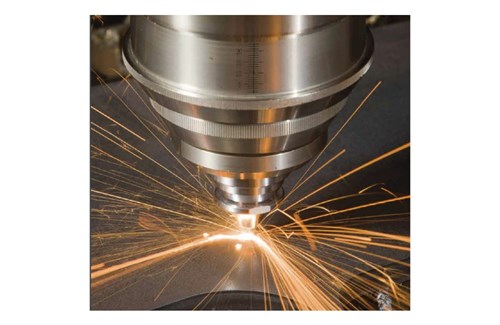 The choice of laser cutting technology generally comes down to material, thickness and the light reflectivity of the material being cut. Generally, fiber lasers are superior in cutting reflective material due to significantly smaller beam size, while CO₂ lasers can cut a wider range of materials. An additional complication is oxidation in the case of O₂ assisted CO₂ laser cutting. Below is a table illustrating the best laser cutting technology to use for different materials:

Table 1: Table illustrating a comparison between CO2 and fibre laser application to cut a variety of materials

Advantages of laser cutting over other cutting technologies

Laser cutting offers many advantages over other cutting technologies such as mechanical die punching, saw cutting, plasma cutting and waterjet. Some of the key advantages are listed and explored below:

Vs Mechanical Cutting
Laser cutting has several key advantages vs mechanical cutting: work holding and reduced contamination of workpiece (no cutting edge to contaminate or be contaminated). Certain part geometries or designs are also possible via laser cutting that could not be made by other methods. Precision is generally better due to less wear and fewer moving parts involved in the cutting process.

Better Sheet Utilization
Fiber lasers in particular have a very focus beam, which reduces kerf width and the amount of material used. Combined with the lower levels of mechanical distortion involved in the cutting process, tighter tolerances, and less material distortion, this means parts can be nested extremely close together on sheet metal being processed by laser cutting. This translates to higher material utilization and lower part cost.

Laser cutting does have some disadvantages vs other fabrication techniques, and these include:

Material Limitations
Laser cutting can be used on a variety of metallic and non-metallic materials, but generally each laser cutter type and the assist gas used impose some limitations.

Material Thickness
Additionally, laser cutting is limited in the thickness of materials that can be cut – thicker materials in particular can exhibit edge micro-burrs and other issues.

In comparison with plasma cutting, laser cutting for metals is generally more precise and uses less energy, but most industrial lasers cannot equal a plasma cutter’s capabilities with metal parts of higher thickness.

Material Hardening
The hardening of laser cut edges due to processing may be problematic for some applications. For example, parts requiring further processing, such as powder coating or painting, may need additional processing following laser cutting before receiving the necessary coating or paint. The addition of this step increases both the turnaround time and total processing costs.

If you have any unanswered questions on sheet metal laser cutting, please follow the suggested links in this document to our proprietary literature which provide a wealth of information on many engineering and production topics. Or visit our corporate website: Komaspec.com. Happy reading!